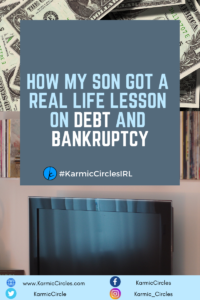 With a shocked look, my 12 year old said, “What? This will put my score at – 45 points. It means I won’t get any electronics, shows or dessert for over a week.”

It all started when we decided, as a family, to use the ‘Karmic Circles’ app at home.  We drafted and accepted, in a family meeting, a framework of points for chores, behaviors and health actions for each family member. We started small but kept adding more deeds to track when we realized (and agreed) that a new rule was called for after an incident.

Typically, a TV show or a  20 mins. electronics session costs each of us 3 points. However, soon after we started using the app, we negotiated an extra 5 point penalty for each show/ electronics session that was sneaked in without permission. Of course, the day we set this rule, my son was feeling good since all new rules were only valid from the next day and so he wasn’t going to be penalized for the show he sneaked in when we weren’t paying attention.

Then last weekend, when we were all out at my daughter’s dance and he was home with his grandparents for 3 hours, he watched 8 shows (all but one without permission).

When I asked him how many shows he had watched, he didn’t seem to remember and that’s when I checked.

Once I saw his reaction, I tried to calm him down. I said, “It’s not the end of the world, this happens in real life and people have to deal with it. When someone spends more money or makes an investment by borrowing that doesn’t work out, they are in debt and if they cannot make a plan to pay the money back by the time it was agreed upon, they might have to declare a bankruptcy.”

At that point, he was quite interested on how that worked in real life and per my suggestion, googled bankruptcy.

He felt a bit better and pointed out that we had agreed on no interest on the debt or the negative points.

I felt a deep sense of gratitude …. for having an amazing son and the opportunity to share a deep-learning life lesson with him.

Helping families organize and track, one user at a time